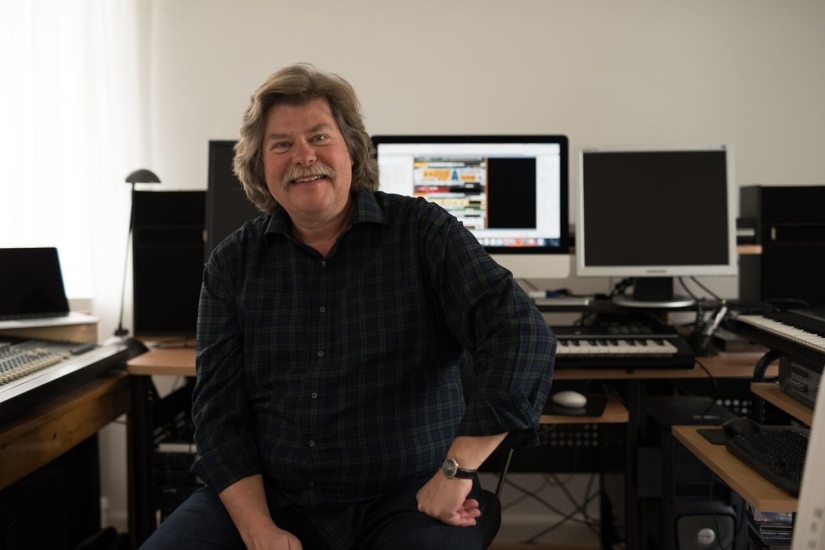 Klaus Schønning was born in 1954 in Denmark and started his musical career as keyboard player in the band 'Jo Banks and Soul Train' with whom he toured extensively in the late seventies. Originally Klaus was hired as organist, but this steadily developed into a great passion for synthesizers and multi-track tape recorders. The band played a lot in a club in Copenhagen called Purple Door, and soon Klaus started to perform intermezzos of instrumental music that was complimented with a series of photographs taken in the woods as well as on the beach. Klaus spend his days as a street musician in Copenhagen earning money to record this music, that would become his first album called 'Lydglimt' (Glimpses of Sound). 'Lydglimt' was to become one of the first albums released with new age music, even before New Age music became an established international genre. It should be noted, that Klaus' music is significantly more structured and elaborate than the music of the New-Age genre. Like most aspiring artists, Klaus tried in vain to get the record companies to release the album. However, this did not make Klaus give up, and instead he financed the release himself and used his bike to distribute the Lps to the record stores. This business model was highly unusual in the late seventies, which led most record stores to buy the album. The unusual sounding 'Lydglimt' and the unusual distribution method also gained recognition in the press.

After the release of 'Lydglimt' in 1979, Klaus went straight into the studio and started to work on what would become his second album 'Cyclus'. At the same time Klaus was commissioned by the Danish National Museum to create music for an exhibition about the vikings. Klaus composed music that should strive to sound like music from a thousand years ago. The music was created using simple flutes and drums. Unlike the recently released album 'Lydglimt', and the upcoming 'Cyclus', this music was created without the use of keyboards and other electronic devices. To this date this music remains unpublished.

After the release of 'Cyclus' in 1980, Klaus recieved a letter from a singer/songwriter who'd heard his music on the radio. Her name was Suzanne Menzel and the two of them soon started to work an album with her songs and Klaus' arrangements. 'Goodbyes and Beginnings' was released in 1981 and didn't initially fare well, making it Susanne Menzel's only album. The success of the album would not happen until nearly fourty years later, when it was rereleased by Frederiksberg Records. Unfortunately Suzanne would not enjoy the unexpected surge of interest, as she passed i 2001.
In 1982 Klaus managed to secure a deal with the danish label Medley Records (later a subdivision of EMI). Here he released 'Nasavu' in 1982, an album about birds and omens connected with birds. Klaus Schønning's name was now becoming well known in the Danish music world, and Klaus' music was often used on radio and television. On 'Nasavu' Klaus introduced an experimental wind synthesizer, that would be an integral part of his sound for many years.

In 1987 Klaus released 'Arctic Light', with the pompous 'Arctic Spring' as the albums center piece. A number of Danish musicians participated during the recordings of 'Arctic Light', including percussionist Mehmet Ozan, drummer Boye Magnussen and guitarist Peter Brander who would also join Klaus on stage at the Tivoli Gardens in Copenhagen, where Klaus was invited to perform on several occations. Coinciding with the release of 'Arctic Light', Klaus moved to Berlin where he began recording the 'Symphodyssé' series - a series of four albums with a more New Agey sound. It turned into some eventful years in Berlin: Klaus experienced the fall of the Berlin Wall in 1989 from his living room window. Shortly after the fall of the wall, Klaus moved to Ditmarsken near Eideren in North Schleswig where he lived here for a few years, until he moved back to Denmark in 1991. The 'Symphodyssé' series was originally intended as a new age work in four parts, one for each corner of the world. And each album was to consist of two compositions of approx. 20 minutes duration. The 'Symphodyssé' series was released from 1988 to 1993. The first two albums were recorded in the studio in Berlin, the third album was recorded in Ditmarsken and the fourth was recorded in Denmark.

Through the nineties Klaus continued to record music, releasing an album approximately every other year. Klaus also played live, and he was often found on stage with harpist Kim Skovbye and guitarist Peter Brander. This constellation of musicians turned into the band 'The North', which was the first band Klaus had committed to since Soul Train in the seventies. The difference this time being, that Klaus took an active part in composing the bands songs and not just being the keyboard player. The North had the honor of per forming at the opening ceremony for the Øresund bridge connecting Denmark and Sweden.An event that was attended by royals from Sweden and Denmark and broadcast live on several European television stations.

With The North Klaus released two albums while maintaining his own solo discography. In 2004 Klaus wanted to mark his 25th anniversary as a recording artist with a special project. However, at the same time Fønix Musik who had released Klaus' music since the late eighties, decided to shift their focus away from melodic music towards soundscapes and therefore released Klaus from his contract. After about a year with no one to release his music, Klaus met a high school friend, Lars Wiskum, who was no stranger to running businesses. Together they formed the label MusicVenture and brought in Niels Petersen as graphic designer. In 2005 MusicVenture released 'Fairytales' which was reworked to not only mark Klaus' anniversary the year before, but also mark the 200th birthday of danish fairytale poet H.C. Andersen.

In the late noughties Klaus started to work on a string of church concerts where he would mix the sounds of synthesizers with church organ. Klaus also mixed his own compositions with that of classical composers like Bach, Schubert and Ravel. The church concerts ran for about five years and spawned the two albums 'Sacred Moments' and 'Scanctum' before Klaus played what would turn out to be his final concert, later released as 'The Anniversary Concert' in 2016. Present at this concert was singer Sten Sejr who after the show approached Klaus and suggested a collaboration. This became the project 'Schønning & Sejr' where melodies from Klaus' back catalogue was given lyrics and vocals.

After the release of two Ep's with Sten Sejr, Klaus witnessed a surge of interest in his debut album 'Lydglimt'. Klaus was invited to perform Lydglimt live, by a festival for electronic music. However, having decided not to perform live any more, Klaus declined. Not entirely able to shake of the off the offer, Klaus rerecorded the album instead. 'Lydglimt II' was released in 2018. Having rerecorded the entire Lydglimt album, and having added a brand new part to the remastering of his second album 'Cyclus', Klaus wondered if there was anything else in his back calalogue he could expand upon. The answer was the Symphodyssé series which was given four new albums in 2020.

In an attempt to capture the experiences of a long life in music, Klaus wrote and released an autobiography in 2021 called 'A Musical Journey in Accord and Discord'. So far, it has only been released in danish. To this day Klaus continues to record and release music. And as computers and technology is getting faster, and as Klaus is no longer spending time preparing for concerts, his output only seems to increase in frequency.