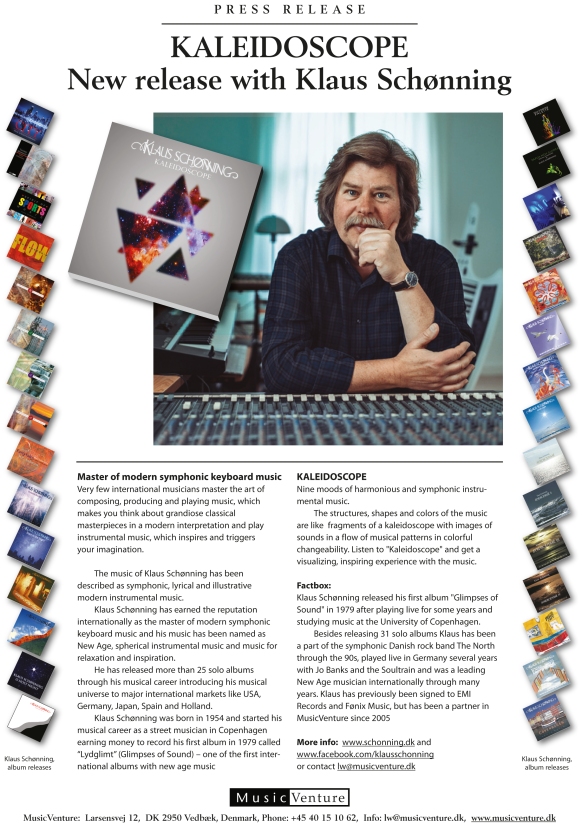 Very few international musicians master the art of composing, producing and playing music, which makes you think about grandiose classical masterpieces in a modern interpretation and play instrumental music, which inspires and triggers your imagination.
The music of Klaus Schønning has been described as symphonic, lyrical and illustrative modern instrumental music. Klaus Schønning has earned the reputation internationally as the master of modern symphonic keyboard music and his music has been named as New Age, spherical instrumental music and music for relaxation and inspiration.
He has released more than 25 solo albums through his musical career introducing his musical universe to major international markets like USA, Germany, Japan, Spain and Holland.
Klaus Schønning was born in 1954 and started his musical career as a street musician in Copenhagen earning money to record his first album in 1979 called “Lydglimt” (Glimpses of Sound) – one of the first inter- national albums with new age music.

The new album, Kaleidoscope, consists of nine moods of harmonious and symphonic instrumental music.
The structures, shapes and colors of the music are like fragments of a kaleidoscope with images of sounds in a flow of musical patterns in colorful changeability. Listen to "Kaleidoscope" and get a visualizing, inspiring experience with the music.